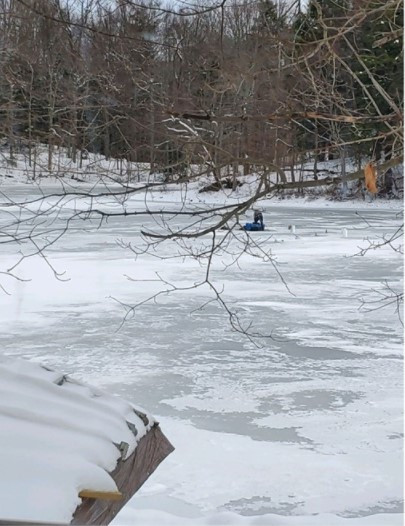 According to New York State Police, on Wednesday, Troopers were dispatched to Loon Lake in Steuben County for an ice rescue. A call came in at around 11:30 AM of two ice fisherman that had fallen through the ice on Loon Lake in the Town of Wayland. Trooper Matthew J. Mckinney was already at the lake when the call was dispatched. According to reports, Mckinney saw a male, 20-year-old Spencer R. Eaton at an ice shanty on the lake. Mckinney shouted out to Eaton to see if he was fishing by himself. It was then that he discovered Eaton’s stepfather Marc D. Rounsville had fallen through the ice. Eaton was holding onto his stepfather but was unable to pull him out of the water. Mckinney returned to his troop car and drove to a local boat launch to establish an escape route, obtaining a life jacket from the Laf A Lot Restaurant and a rope from his patrol vehicle.

Fire department personnel were then able to get Rounsville to land where he was transported by ambulance to Noyes Memorial Hospital for exposure treatment.

More Stories
Sheriff: 73-Year-Old Kayaker Clung to Tree Limb Until Being Rescued from River
“I was just in Lake Pontchartrain”: Two Boaters Rescued after Clinging to a Life Vest in a Tropical Storm
Boaters Rescued near Topsail Island
Unsung Heroes: Scout, his Scouter Mom Rescue Kayaker from Possible Yypothermia